The time range displayed on the JUMO LOGOSCREEN 500 cf is determined by the programmed memory cycle.
Different memory cycles can be programmed for the three possible operating modes: "Normal operation", "Time operation" and "Event operation". This allows, for instance, to save measured values more frequently, e.g. in the event of overrange or in a specific time frame, and, thus, have available a higher resolution within the time axis.

Is the connection, interface type (RS232/RS485) and connection, correct?
For the RS485, an additional external interface converter to RS232 or USB is often required for connection to a PC. 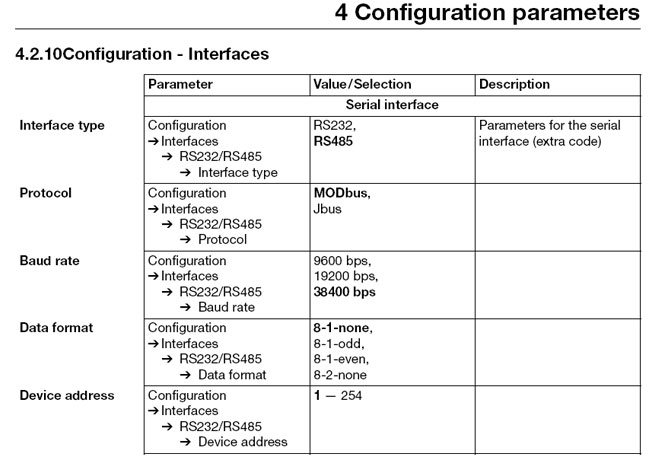 Calculation of the recording time

Please refer to chapter 2.8 in this operating manual for the orientation values listed in a table.
Take into consideration, that the internal memory in the Logoscreen 500cf operates as a ring memory, whereas the measured data saved on the external CF card cannot be overwritten automatically by the Logoscreen 500cf.
Thus, the old data remains saved on the CF card if the recording time is exceeded, whereas the internal memory contains the latest data. Measured data is lost for the time inbetween. 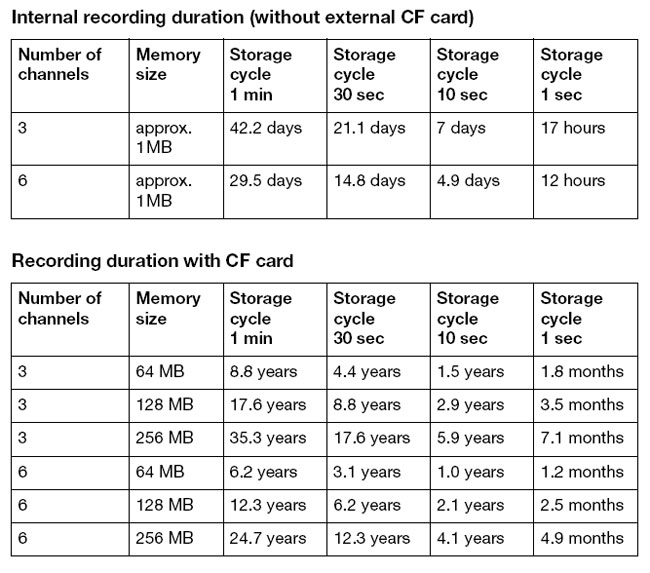 Compact Flash memory cards (Industrial Grade) up to max. 2 GB can be used.
Format: FAT or FAT16
For a high data security, we recommend to only use the CF cards available from JUMO as accessories for this recorder. These CF cards were tested together with the Logoscreen 500cf and have been proven in practice.

1. Release of integrators and counters as well as the maths and logics module.
Release of these software options at a later time is possible with the setup program and also directly on the device using the keys.

1.1 Proceed as follows to release the options using the keys on the device:
A code number is read out first from the logoscreen 500cf. For this purpose, invoke the following menu:
Configuration level à Device data à Option release à Determined code No.
The number code displayed here including the possible prefix is sent to JUMO by telephone, fax or mail.
JUMO will generate a device-specific release key from this code No.
Then, enter this release key into the respective field on the device to release the option. The option is immediately available and can be configured and used as required by the user. 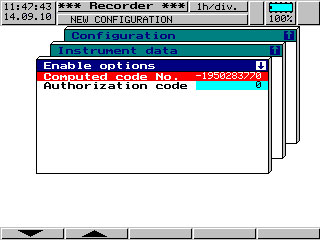 1.2 Option release via the setup program:
The extra code "Maths", "Counters/integrators" can be released at a later time using the Logoscreen 500cf setup program and an interface connection to the recorder.
Complete wiring of the Logoscreen 500cf is not required for the option release. It is only necessary to connect the recorder voltage supply.
The interface connection can be easily established with a JUMO USB-TTL or JUMO RS232-TTL interface via the serial programming interface.
An optional RS485/RS422/RS232 interface can be used for establishing the connection as an alternative to the JUMO interface lines.
A code number for maths and counters/integrators can be generated (= read out) in the setup program under the "EXTRAS" - "Release of extra codes" menu point. The displayed code number including the possible prefix is sent to JUMO by telephone, fax or mail.
JUMO will generate a device-specific release code from this code number.
Enter this release code in the setup program in the field following "Enter release code" on the PC to release the option. 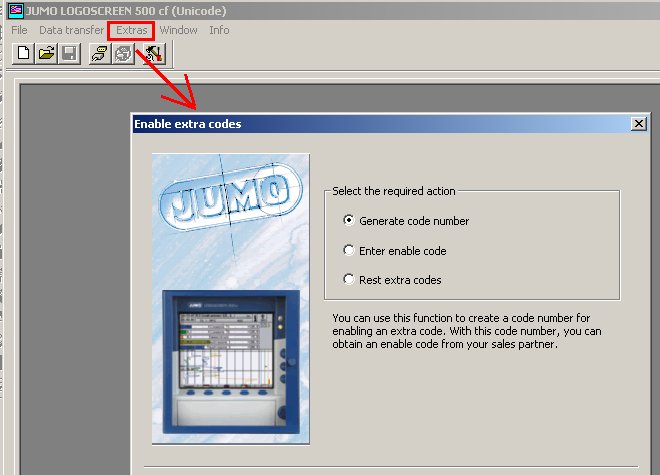 Info symbol ("i") in the status bar flashes 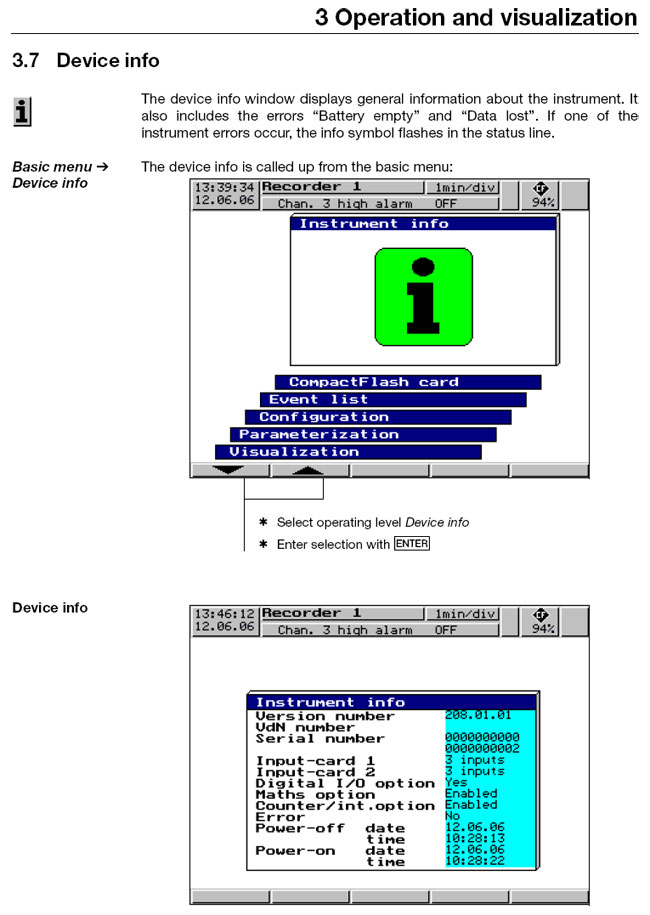 An inspection certificate 2.2 of an acceptance test certificate 3.1.B can be issued for the LOGOSCREEN 500cf upon request.
For this purpose, send the device to JUMO including a list of the specified measuring points to be moved to.
It is possible to calibrate complete temperature measuring strings in the user factory as well as in our plant in addition to the calibration of the individual paperless recorder. For this purpose, a DKD laboratory is available in the JUMO main factory in Fulda.

Recalibration of the measuring inputs

The configuration level on the device and the "Precise adjustment" subroutine can be used to adapt each individual analog input to reference signals. This device-specific precise adjustment is exclusively carried out using the keys on the recorder to avoid overwriting or transmitting this adjustment unintentionally.
The precise procedure is described in the operating manual, chapter 4.2.11. 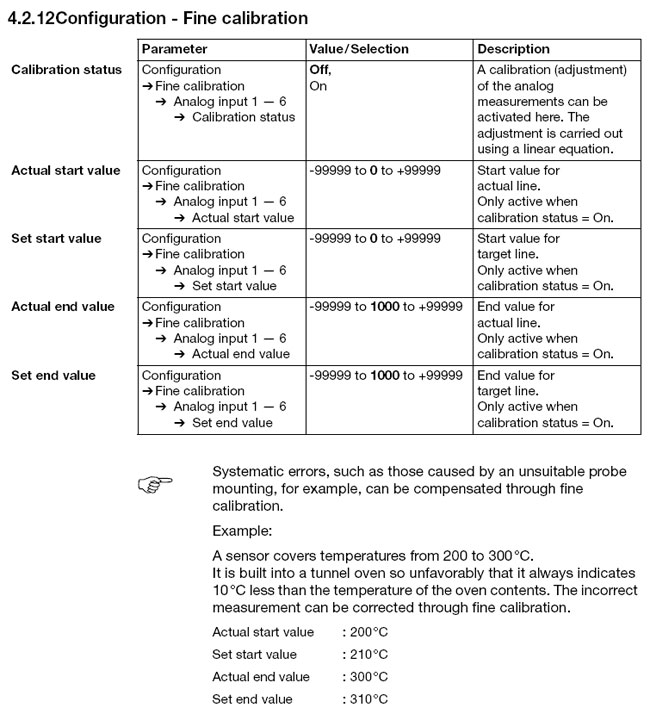 Software for the Logoscreen 500cf

The following PC software is optionally available for the Logoscreen 500cf:

The following applies to all three software products:
The current version is always available for free download on the JUMO homepage. A licence number, which has to be purchased, is required for use as full version. The purchased licence number will remain valid during an update.
The PCA3000 can be used for displaying PCA archive data without licence number for transmitting recorded measured values, e.g. to customers or authorities.

The undocumented parameters can be used to carry out further adaptations of the device functions to special requirements. However, these parameters should only be changed after being discussed with JUMO and with their expressive instructions to avoid incorrect settings.

Presetting or reset of counters and integrators

The counters and integrators can be preset or reset via the "Counter/integrator reset" in the parameter level directly on the Logoscreen 500cf.
There, new entries can be easily made for the individual counters and integrators. This intervention is documented in the event list.
Further information about this subject can be found in chapter 2.5.2 of the operating manual. 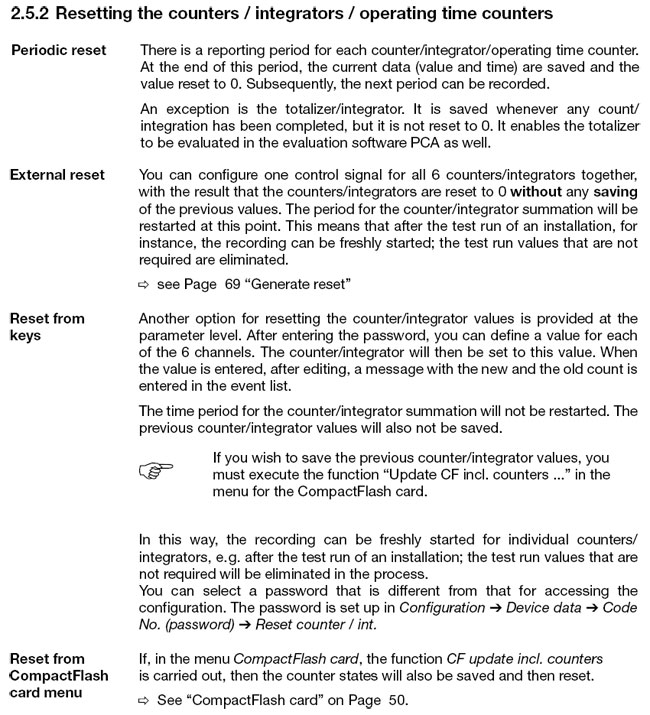 If two lines or two columns appear per input signal on the recorder or when evaluating the PCA3000, the following reason applies:
The setting Peak values is factory set under "Recording" - "Normal operation" - "Saved values:". With this setting, the min and the max value is determined and saved in each memory cycle.
This peak value recording is particularly suitable for applications, to which the following statements apply:

For several "Standard applications", we recommend to select the setting "Average Value" under "Saved values:". Then the Logoscreen 500cf calculates the respective average value from the measured values collected in the memory cycle prior to saving and saves only one value per cycle. In this case, only one line per channel is displayed.

Or send us a message